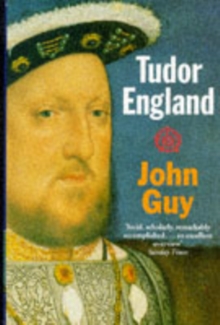 From Henry VII's capture of the crown at Bosworth in 1485 to the death of Elizabeth I in 1603, Tudor England witnessed far-reaching changes in politics and religion under Henry VIII, Edward VI, Mary and Elizabeth herself.

John Guy's compelling new history is the most complete account of that momentous period to appear in over thirty years. Based on the most thorough knowledge of the sources and literature relating to the Tudors, his book is the first to take note of fresh debates on the progress of the English Reformation, and on the strengths and weaknesses of Tudor government at national and local level.

Authoritative, comprehensive, clearly argued, and crisply written, the story is enriched by lively character studies of monarchs and politicians.

The main themes of the period are closely analysed, and topics such as theeconomy and society, and political culture are placed firmly in their historical context, in individual chapters.