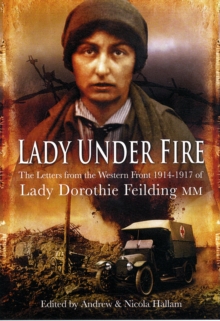 Lady under fire on the Western Front : the Great War letters of Lady Dorothie Feilding MM

When Britain went to war in 1914 many people from all backgrounds rallied to the cause, determined to join the colours or be useful in some other way. Lady Dorothie Feilding, the twenty-five-year-old daughter of the Earl of Denbigh, wasted no time volunteering for the Munro Motor Ambulance Corps. Spending nearly four years on the Western Front in Belgium driving ambulances, she had the distinction of being became the first woman to be awarded the Military Medal for her bravery as well as the French Croix de Guerre and the Belgian Order of Leopold.Fortunately the hundreds of letters that she wrote to her family at Newnham Paddox, near Rugby, have been discovered and carefully edited by Andy and Nicola Hallam. These reflect the tragedy and horror of war and also the tensions of being a woman at the front contending with shells, traumatic wounds, gossip, lice, vehicle maintenance and inconvenient marriage proposals.

She enjoyed a ready access to all levels of military life and her candid comments and insightful observations make fascinating reading. Despite her sheltered and privileged upbringing Dorothie was clearly feisty young woman with a devil-may-care attitude to danger and authority.

Her easy-going approach to life transcended social boundaries and that endeared her to all that she came into contact with whether royalty, senior commanders or Tommies.

Lady Under Fire on the Western Front offers the reader a rare, possibly totally unique, view of The Great War.BioLady Dorothie Mary Evelyn Feilding, born in 1889, was the second daughter of the 9th Earl of Denbigh. She was educated at Newnham Paddox, the family home and at the Assumption Convent in Paris.Her experiences as a volunteer with the Munro Motor Ambulance Corps from 1914 to 1917 are the subject of this book.She married Charles Moore at Newnham Paddox on 5 July 1917 and they had four daughters and a son.She died on 24 October 1935 at Mooresfort, Tipperay.