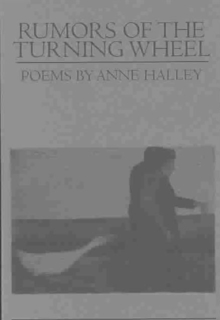 Rumors of the turning wheel

The title of this powerful collection refers to the wheel of fortune.

In a time long before television game shows, a wood and wire crank-driven mechanism would be set up and turned by hand at fairs and carnivals, next to the puppet-show booth, the pot and pan vendors, and the horsedrawn carousel.

Country folk and children watched to see where the turning wheel would stop and if their folded paper "chance" might reveal the lucky number that won a prize.

The wheel turns more noisily, portentously, and can take on disguised or secret forms when Fortuna concerns herself with the fate of rulers and nations.

Rumors of all kinds will be heard as the wheel's turnings stir the air.

Rumors of war, of course, strange births, rape, the collapse of powerful houses and incestuous loves, always the rumor of impending death, sometimes a rumor of survivals and, often, one of hope for the children.

These rumors were gathered on the sidelines and in the market squares during the last - the catastrophic twentieth - century, and they form the starting point for this memorable collection.