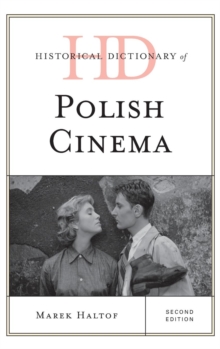 Part of the Historical Dictionaries of Literature and the Arts series

In 1902, scientist and inventor Kazimierz Proszynski made the first Polish narrative film, The Return of a Merry Fellow.

Since then, the Polish film industry has produced a diverse body of work, ranging from patriotic melodramas and epic adaptations of the national literary canon to Yiddish cinema and films portraying the corrupt side of communism.

Often performing specific political and cultural duties for their nation, Polish filmmakers were well aware of their role as educators, entertainers, social activists, and political leaders.

This second edition of Historical Dictionary of Polish Cinema fills the gap in film scholarship, presenting an extensive factual survey of Polish film.

Through a chronology; an introductory essay; appendixes, a bibliography; and over 300 cross-referenced dictionary entries on films, directors, actors, producers, and film institutions, a balanced picture of the richness of Polish cinema is presented.

Readers with professional interest in cinema will welcome this new work, which will enhance senior undergraduate or postgraduate courses in film studies.