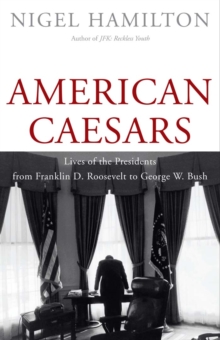 Modeled on one of the most famous histories of ancient Rome (The Twelve Caesars), Nigel Hamiltons new book, American Caesars, looks afresh at the lives and careers of the twelve leaders of the American empire since World War II, from Franklin D.

Roosevelt to George W. Bush.President by president, Hamilton relates and examines the presidents unique characters, their paths to Pennsylvania Avenue, their effectiveness as global leaders, and their lessons in governance, both good and bad.

With uncompromising candor he looks at how these powerful men responded to the challenges that defined their presidenciesFDRs role as a war leader, Harry Trumans decision to mount a Berlin Airlift rather than pursue military confrontation with the Soviets, Lyndon Johnsons undertaking of controversial Civil Rights legislation and his disastrous war in Vietnam, Jimmy Carters handling of the Iran hostage crisis, George H.

W. Bushs effectiveness in guiding the world during the collapse of the Soviet Union, and his sons fateful invasions of Afghanistan and Iraq, as well as other salient episodes in modern American history.

In the Suetonian manner, Hamilton also looks at the presidents private livessome noble, some flawed, some deeply moving.In this essential book for our times, Hamilton strips away myths and wishful thinking to record our most recent presidents as they really were: leaders guiding the fortunes of an unruly empire, on a world stage.

In its scope, clarity, readability, and empathy, American Caesars is destined to become a modern classic.