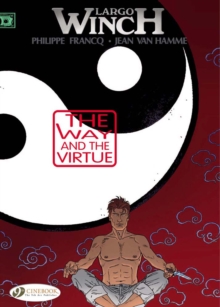 The way and the virtue

The triads of Hong Kong are about to be introduced to the Tao of the Billionaire.

Largo has disappeared. His friends and employees are trying to find him while they keep the W Group ticking, but no one seems to know what has happened to him-not even the Chinese authorities.

It will be up to the billionaire, locked in a cell with a corpse as his only companion, to escape on his own before he can begin reassessing who are his allies and who are his enemies. KEY SELLING POINTS: *More than 10 million French-language copies sold*Two feature-length films starring Tomer Sisley as Largo Winch, with Kristin Scott Thomas and Sharon Stone, were released in France in 2008 and 2011.*Hugely popular series that has been translated into at least 8 languages The 12th adventure of the reluctant tycoon!

Largo Winch is a rare breed of man: a multi-billionaire who distrusts money.

Being rich does have advantages, but it also brings headaches, troubles, conspiracies, murder attempts and other despicable behaviour in competitors and underlings.

Largo has to stay on top of it all...