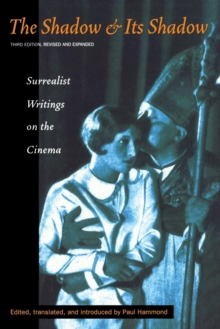 The Shadow and its Shadow : Surrealist Writings on the Cinema

The Shadow and Its Shadow is a classic collection of writings by the Surrealists on their mad love of moviegoing. The forty-odd theoretical, polemical, and poetical re-visions of the seventh art in this anthology document Surrealism's scandalous and nonreductive take on film.

Writing between 1918 and 1977, the essayists include such names as Andre Breton, Louis Aragon, Robert Desnos, Salvador Dali, Luis Bunuel, and man Ray, as well as many of the less famous though equally fascinating figures of the movement. Paul Hammond's introduction limns the history of Surrealist cinemania, highlighting how these revolutionary poets, artists, and philosophers sifted the silt of commercial--often Hollywood--cinema for the odd fleck of gold, the windfall movie that, somehow slipping past the censor, questioned the dominant order. Such prospecting pivoted around the notion of lyrical behavior--as depicted on the screen and as lived in the movie house.

The representation of such behavior led the Surrealists to valorize the manifest content of such denigrated genres as silent and sound comedy, romantic melodrama, film noir, horror movies. As to lived experience, moviegoing Surrealists looked to the spectacle's latent meaning, reading films as the unwitting providers of redemptive sequences that could be mentally clipped out of their narrative context and inserted into daily life--there, to provoke new adventures. "Hammond's book is a reminder of the wealth and range of surrealist writings on the cinema...[T]he work represented here is still challenging and genuinely eccentric, locating itself in an 'ethic' of love, reverie and revolt." --Sight & Sound "Hammond, who is the author of the invaluable anthology The Shadow and its Shadow: Surrealist Writing on the Cinema (1978), writes about cinema independently of the changing academic and cultural fashions of film theory and abhors the dogmas of contemporary border-patrol thought.

He is the author of Constellations of Miro, Breton which was published by City Lights.