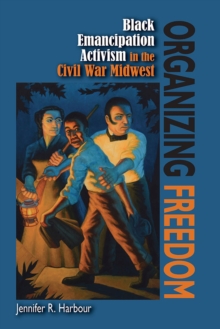 Organizing Freedom is a riveting and significant social history of black emancipation activism in Indiana and Illinois during the Civil War era.

By enlarging the definition of emancipation to include black activism, author Jennifer R.

Harbour details the aggressive, tenacious defiance through which Midwestern African Americans-particularly black women-made freedom tangible for themselves. Despite banning slavery, Illinois and Indiana share an antebellum history of severely restricting rights for free black people while protecting the rights of slaveholders.

Nevertheless, as Harbour shows, black Americans settled there, and in a liminal space between legal slavery and true freedom, they focused on their main goals: creating institutions like churches, schools, and police watches; establishing citizenship rights; arguing against oppressive laws in public and in print; and, later, supporting their communities throughout the Civil War. Harbour's sophisticated gendered analysis features black women as being central to the seeking of emancipated freedom.

Her distinct focus on what military service meant for the families of black Civil War soldiers elucidates how black women navigated life at home without a male breadwinner at the same time they began a new, public practice of emancipation activism.

During the tumult of war, Midwestern black women negotiated relationships with local, state, and federal entities through the practices of philanthropy, mutual aid, religiosity, and refugee and soldier relief. This story of free black people shows how the ideal of equality often competed against reality in an imperfect nation.

As they worked through the sluggish, incremental process to achieve abolition and emancipation, Midwestern black activists created a unique regional identity.