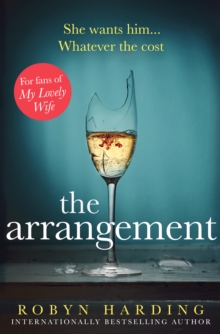 ***The latest must-read thriller from the master of domestic suspense*** Natalie has moved to New York City to get away from a family she no longer feels a part of and an ex-boyfriend whose love for her has grown into obsession.

Struggling to study, work and pay her bills, she finds that life in the city isn't all that she'd hoped. And when she discovers that her ex may have followed her to New York, it feels like everything is falling apart. When she meets Gabe, all of her problems seem to fall away.

Although more than thirty years her senior, he's handsome and rich and can keep her safe.

She can't help but fall madly in love. But Gabe already has a family, whom he must put before anything else, and his relationship with Natalie soon devolves into a nightmare. Because she isn't content with being number two in Gabe's life - and she has no intention of giving him up . . . Emotionally powerful and packed with page-turning suspense, The Arrangement delves into a world of deception, obsession and the lines people are willing to cross to hold on to what they love. Praise for Robyn Harding: 'Painfully compulsive, this riveting drama piles layer upon layer of tension' Sunday Mirror 'If you enjoyed Big Little Lies, you'll love this explosive family drama' Take a Break 'A compulsive page turner' Bella 'A compulsive page-turner that mines the push-pull between basic impulses and doing the 'right thing,' The Party is a domestic drama that spins off the rails with hellish consequences' Erica Ferencik, author of The River at Night 'A tense and riveting story about one night gone horribly wrong, and the fallout within a family and a group of friends.

Secrets, desires, choice and consequence, The Party reveals that what lies inside a family-and each person-is not always as it seems.

I was hooked from the opening scene and could not look away until I reached the very last page' Megan Miranda, New York Times bestselling author of All the Missing Girls 'Cleverly constructed and brilliantly paced, The Party is a raw telling of a family coming apart at the seams.

Robyn Harding weaves a riveting tale that is impossible to put down' Bill Clegg, New York Times bestselling author of Did You Ever Have a Family