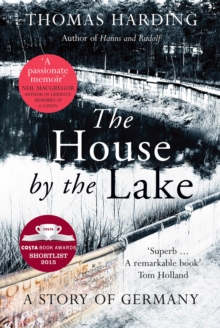 The house by the lake : a story of Germany

SHORTLISTED FOR THE COSTA BIOGRAPHY AWARD 2015LONGLISTED FOR THE ORWELL PRIZE 2016 A RADIO 4 BOOK OF THE WEEK`A passionate memoir.' Neil MacGregor`A superb portrait of twentieth century Germany seen through the prism of a house which was lived in, and lost, by five different families.

A remarkable book.' Tom Holland`Personal and panoramic, heart-wrenching yet uplifting, this is history at its most alive.' A.D.

Miller In the spring of 1993, Thomas Harding travelled to Berlin with his grandmother to visit a small house by a lake.

It was her 'soul place', she said - a sanctuary she had been forced to leave when the Nazis swept to power.

The trip was a chance to see the house one last time, to remember it as it was.

But the house had changed. Twenty years later Thomas returned to Berlin. The house now stood empty, derelict, soon to be demolished.

A concrete footpath cut through the garden, marking where the Berlin Wall had stood for nearly three decades.

Elsewhere were signs of what the house had once been - blue tiles showing behind wallpaper, photographs fallen between floorboards, flagstones covered in dirt.

Evidence of five families who had made the house their home over a tumultuous century. The House by the Lake is a groundbreaking work of history, revealing the story of Germany through the inhabitants of one small wooden building: a nobleman farmer, a prosperous Jewish family, a renowned Nazi composer, a widow and her children, a Stasi informant.

Moving from the late nineteenth century to the present day, from the devastation of two world wars to the dividing and reuniting of a nation, it is a story of domestic joy and contentment, of terrible grief and tragedy, and of a hatred handed down through the generations.

It is the long-awaited new work from the bestselling author of Hanns and Rudolf.