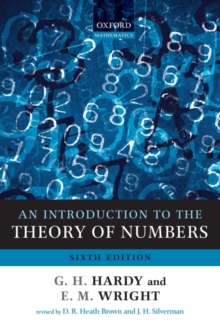 An introduction to the theory of numbers

Part of the Oxford mathematics series

Developed under the guidance of D.R. Heath-Brown this Sixth Edition of An Introduction to the Theory of Numbers has been extensively revised and updated to guide today's students through the key milestones anddevelopments in number theory.

Updates include a chapter by J.H. Silverman on one of the most important developments in number theory - modular elliptic curves and their role in the proof of Fermat's Last Theorem - a foreword by A.

Suggestions for further reading are also included for the more avid readerThe text retains the style and clarity of previous editions making it highly suitable for undergraduates in mathematics from the first year upwards as well as an essential reference for all number theorists.