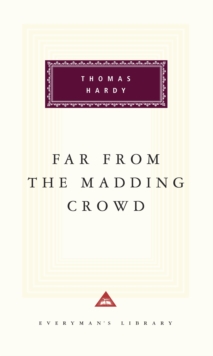 By: Hardy, Thomas,  Slater, Michael(Introduction by)

Far From the Madding Crowd, published in 1874, is the book that made Hardy famous.

Bathsheba Everdene is a prosperous farmer in Hardy's fictional Wessex county whose strong-minded independence and vanity lead to disastrous consequences for her and the three very different men who pursue her: the obsessed farmer William Boldwood, dashing and seductive Sergeant Frank Troy, and the devoted shepherd Gabriel Oak.

Despite the violent ends of several of its major characters, Far from the Madding Crowd is the sunniest and least brooding of Hardy's great novels, as Bathsheba and her suitors move through a beautifully realized late-nineteenth-century agrarian landscape that is still almost untouched by the industrial revolution and the encroachment of modern life. With an introduction by Michael Slater