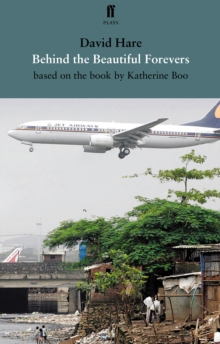 Behind the beautiful forevers

It's not just that rich people don't know what they've got.

They don't even know what they throw away. India is beginning to prosper. But beyond the luxury hotels surrounding Mumbai airport is an obstacle, amakeshift slum.

It's home to foul mouthed Zehrunisa and her garbage sorting son Abdul, entrepreneurs both.

Asha, go-to woman, exploits every scam to become a first-class person. And Fatima, One Leg, is about to make an accusation that will destroy herself and shatter the neighbourhood.

Now from Boo's book, which won the National Book Award for Non-Fiction in 2012, David Hare has fashioned an epic play for the stage which details the ingenious and sometimes violent ways in which the poor and disadvantaged negotiate with corruption to seek a handhold on capitalism's lowest rungs. David Hare's stage adaptation of Behind the Beautiful Forevers premiered at the National Theatre, London, in November 2014.