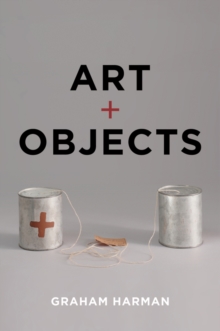 In this book, the founder of object-oriented ontology develops his view that aesthetics is the central discipline of philosophy.

Whereas science must attempt to grasp an object in terms of its observable qualities, philosophy and art cannot proceed in this way because they don't have direct access to their objects.

Hence philosophy shares the same fate as art in being compelled to communicate indirectly, allusively, or elliptically, rather than in the clear propositional terms that are often taken - wrongly - to be the sole stuff of genuine philosophy. Conceiving of philosophy and art in this way allows us to reread key debates in aesthetic theory and to view art history in a different way.

The formalist criticism of Greenberg and Fried is rejected for its refusal to embrace the innate theatricality and deep multiplicity of every artwork.

This has consequences for art criticism, making pictorial content more important than formalism thinks but less entwined with the social sphere than anti-formalism holds.

It has consequences for art history too, as the surrealists, David, and Poussin, among others, gain in importance.

The close link between aesthetics and ontology also invites a new periodization of modern philosophy as a whole, and the habitual turn away from Kant's thing-in-itself towards an increase in philosophical "immanence" is shown to be a false dawn. This major work will be of great interest to students and scholars of philosophy, aesthetics, art history and cultural theory.