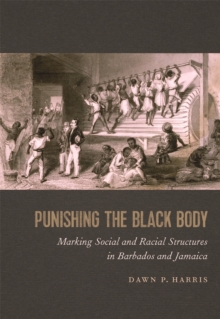 Punishing the Black Body : Marking Social and Racial Structures in Barbados and Jamaica

Punishing the Black Body examines the punitive and disciplinary technologies and ideologies embraced by ruling white elites in nineteenth-century Barbados and Jamaica.

Among studies of the Caribbean on similar topics, this is the first to look at the meanings inscribed on the raced, gendered, and classed bodies on the receiving end of punishment.

Dawn P. Harris uses theories of the body to detail the ways colonial states and their agents appropriated physicality to debase the black body, assert the inviolability of the white body, and demarcate the social boundaries between them. Noting marked demographic and geographic differences between Jamaica and Barbados, as well as any number of changes within the separate economic, political, and social trajectories of each island, Harris still finds that societal infractions by the subaltern populations of both islands brought on draconian forms of punishments aimed at maintaining the socio-racial hierarchy.

Her investigation ranges across such topics as hair-cropping, the 1836 Emigration Act of Barbados and other punitive legislation, the state reprisals following the 1865 Morant Bay Rebellion in Jamaica, the use of the whip and the treadmill in jails and houses of correction, and methods of surveillance, policing, and limiting free movement.

By focusing on meanings ascribed to the disciplined and punished body, Harris reminds us that the transitions between slavery, apprenticeship, and post-emancipation were not just a series of abstract phenomena signaling shifts in the prevailing order of things.

For a large part of these islands' populations, these times of dramatic change were physically felt.