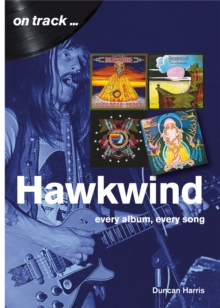 Hawkwind : every album, every song

Part of the On Track series

Always enigmatic and outside of the mainstream, most people associate Hawkwind with 'whoosh' noises, `Silver Machine', Lemmy and the sometime recognition that they produce something called 'Space Rock' music.

From the beginning, Hawkwind have been trailblazers, even when they have explored blind alleys and cul-de-sac's, and have been unafraid to innovate, and mutate strikingly different musical arenas.

Hawkwind have a unique history in the world of rock music and have inspired not just other bands but also an entire sub-genre of music: Stoner Rock.

Hawkwind's stated aim is to be a substitute for mind-expanding drugs; instead using music, poetry, lights, projections, theatre and dance in an assault on the senses.

Albums such as In Search Of Space and Warrior at the Edge of Time as well as classic live album Space Ritual set a template for their astonishing take on rock music. With the band now celebrating over fifty years of existence, this book is a song-by-song analysis of every studio album and major live release to date.

It is designed to be an illuminating companion to the extraordinary recorded works of a band no-one thought would achieve any longevity at all.

From the highly regarded first five studio albums of the 1970's, through the hard rock hardships of the 1980's, the sometimes awkward musical dalliances of the 1990's and ending with the unexpectedly triumphant return of the band in the 2010's this book will cover every era and every line-up in detail.