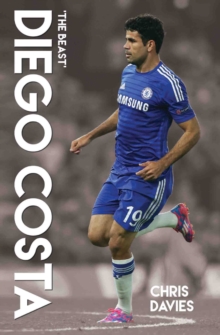 TAKE A LOOK INTO THE RICH HISTORY OF ENGLISH FOOTBALL AND THE GRAND OLD NAME OF CHELSEA FOOTBALL CLUB WILL INEVITABLY ENJOY MORE THAN A PASSING MENTION.

AND AFTER A FRUSTRATING SEASON WHICH SAW THE CLUB FINISH TANTALISINGLY CLOSE TO WINNING THE PREMIER LEAGUE TITLE, THE SUMMER OF 2014 WITNESSED THE ARRIVAL OF A NEW STAR IN WEST LONDON.

Fresh from an outstanding season in Spain, where his thirty-six goals had propelled Atletico Madrid to a first La Liga title since 1996 and to within seconds of a maiden Champions League crown, Diego Costa arrived at Stamford Bridge for GBP32 million. Brazilian by birth, Costa had caused an enormous wave of controversy in his homeland after opting to take Spanish citizenship and a subsequent place in Spain's squad over the opportunity to represent the Selecao in a home World Cup in 2014.

An early exit for Spain ensued but, undeterred, Costa arrived in the English capital tasked by manager Jose Mourinho with scoring the goals that had eluded many of his predecessors the previous season. And with a Premier League record of seven goals in his first four starts he took to the physical nature of England's top division with typical aplomb.Costa began his nomadic rise to the top via the lower echelons of Portuguese and Spanish football, before establishing himself as a force under Diego Simeone's rejuvenated Atleti. Affectionately nicknamed 'El Cholo', 'the Beast', his pace, power, aggression and deadly finishing have swiftly seen him become a crowd favourite at 'the Bridge'.

Diego Costa: 'The Beast' is an in-depth look into the life of this spectacular footballer and his rise to the very top.