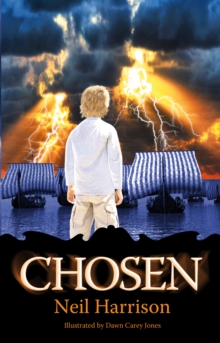 Josh, an 11-year-old boy living in Leeds, is thrown into turmoil when his single mum goes into hospital.

He is forced to live with one of his uncles, the disciplinarian Nathan, near Whitby on the Yorkshire coast.

But when his other uncle, the bohemian Rupert, unexpectedly takes Josh to stay with him in his caravan at Whitby, Josh is propelled into a world that will change his life forever...The mysterious Rachel befriends Josh and foretells an unthinkable destiny for him which spirals into further confusion when Nathan eventually collects Josh from Rupert.

As Josh explores Nathan’s rambling house, he discovers the Bergen Prophecy, a thousand-year-old legend that predicts the return of the brutal Viking, Harald Greycloak.

The warrior’s mission is to destroy Whitby in revenge for the death of his father, Eric Bloodaxe, the ruthless former king of Jorvik (York).

Josh discovers the painting of the Viking heroine Freyja, The Shield Maiden, in Nathan’s house; a portrait that bears an uncanny resemblance to Rachel.

When he uncovers a secret hidden in the walls of the house, the truth about Josh, his fate and the house is evident.

He has been chosen to protect Whitby against Greycloak – but what will he do when he comes face to face with his destiny?

Is Rachel telling him the whole story, and what greater havoc is about to be unleashed on Josh and his friends?A modern-day tale with a Viking mythology twist, Chosen is a gripping work of adventure fiction that will appeal to children aged nine to 12.

Author Neil has been inspired by a number of authors, including Michelle Paver, Rick Riordan and Michael Morpurgo.Chosen won the Gold award in the 9-12 year-old category of the Wishing Shelf Independent Book Awards 2012.