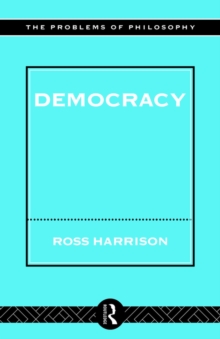 Part of the Problems of Philosophy series

Democracy is today universally considered to be a good thing, yet in history has been frequently been criticized.

Ross Harrison argues the merits of democracy by tracing its history from the works of, amongst others Plato, Aristotle, Hobbes, Locke and Rousseau.

This historical perspective provides a repertory of specific problems in which democracy converges with the values of liberty, equality, knowledge and welfare to argue the benefits and drawbacks of democracy.

Any overall assessment must therefore take account of such complexity.

Democracy shows us how we may navigate between these moral conflicts, by examining the paradoxes and problems that arise and arguing their resolution.

Ross Harrison provides a clear analytical justification of democracy, informed by facts and detailed knowledge of the work of major thinkers of the past.