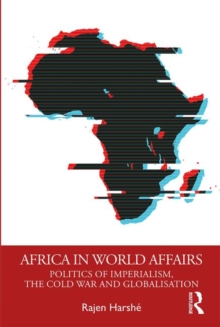 Africa in world affairs : politics of imperialism, the Cold War and globalisation

Africa finds itself at the centre stage of world politics in the twenty-first century.

To truly determine its rising influence and role in world affairs would mean unravelling the politics of imperialism, the Cold War and globalisation.

Going beyond Euro-American perspectives, this book presents a comprehensive study of Africa and its role in world politics.

Africa in World Affairs:* Closely examines the transition of Africa in its colonial and post-colonial phases;* Explores the intellectual history of modern Africa through liberation struggles, social movements, leaders and thinkers;* Investigates the continent's relationships with former colonial powers such as Britain, France and Portugal; untangles complexities of French neo-colonialism and sheds light on the role of the superpower, such as the USA and major and rising powers like China and India;* Highlights complex and wide-ranging diversities of the region, and the ways in which it continues to negotiate with issues of modernity, racism and globalisation. A core text on Africa and the world, this book will be indispensable for students of African studies, politics and international relations, and history.

It will also be a must-read for policymakers, diplomats and government think tanks.