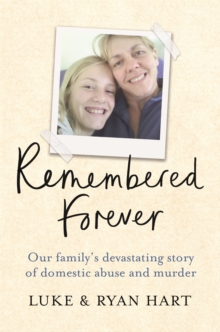 Praise for Luke and Ryan Hart's memoir:'A powerful, searing account from incredible brothers and an important contribution to our understanding of domestic abuse' Victoria Derbyshire'... a courageous account of domestic abuse and the devasting impact it has on families' Jeremy Corbyn MP'Relevant and inspiring' Chris Green, White Ribbon UKOn 19 July 2016, Claire and Charlotte Hart were murdered, in broad daylight, by the family's father.

He shot his wife and daughter with a sawn-off shotgun before committing suicide. REMEMBERED FOREVER is the shocking story of what led to this terrible crime.

Luke and Ryan Hart, the family's two surviving sons, lived under the terror of coercive control.

Their father believed that his family members were simply possessions, never referring to them by their names ... just as Woman, Boy, Girl. Written by the boys, but laced with the voices of Claire and Charlotte, this gripping and moving account brings deeper understanding to the shocking crime of domestic abuse and homicide. Luke and Ryan Hart have become spokespeople for the victims who are so often silenced but must never be forgotten.