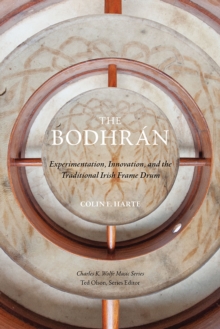 The Bodhran : Experimentation, Innovation, and the Traditional Irish Frame Drum

In the past fifty years, the bodhrAn, or traditional Irish circular frame drum, has undergone a rapid evolution in development.

Traditionally, it is a shallow drum ranging from ten to twenty-six inches in diameter, covered in goatskin on the top (or drum) side and open on the other.

Unlike any other instrument associated with Irish traditional music, the bodhrAn has been dramatically altered by its confrontation with modern instrument design, performance techniques, and musical practice.

Colin Harte's The BodhrAn: Experimentation, Innovation, and the Traditional Irish Frame Drum presents a definitive history of the bodhrAn from its early origins to its present-day resurgence in Irish American folk music. The bodhrAn has global roots and bears many characteristics of older drums from northern Africa and the Middle East.

Harte picks up on these basic similarities and embarks on an engaging tour of the instrument's historical and organological development, gradual evolution in playing styles, and more recent history of performative practice.

Drawing from a host of interviews over a multi-year period with participants primarily located in Europe and North America, this work provides a platform for multiple perspectives regarding the bodhrAn.

Growing out of rich ethnographic interviews, this book serves as the definitive reference for understanding and navigating the developments in the bodhrAn's history, organology, performance practices, and repertoire.