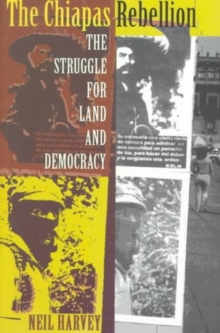 The Chiapas Rebellion : the struggle for land and democracy

In 1994, the Zapatista rebellion brought international attention to the southern Mexican state of Chiapas.

Neil Harvey combines ten years of field work in Chiapas with extensive historical and political research to provide a comprehensive history of conflict in this region and a nuanced analysis of this rural uprising against federal bureaucracy and landed elites.

He compares the struggles for agrarian rights of three grassroots movements facing hostility from both local elites and federal bureaucrats.

His examination of the complexities of political change in Chiapas includes the impact of neoliberal economic policies, the origins of the Zapatista army of National Liberation (EZLN), and the political impact of the rebellion itself. Engaging with current theoretical debates on the role and significance of social movements in Mexico and Latin America, Harvey focuses on the primacy of political struggle and on the importance of these movements in the construction and meaning of citizenship.

While suggesting that the Zapatista revolution has heightened awareness among the people of Chiapas of such democratic issues as ethnicity, gender, and land distribution, he concludes with an analysis of the obstacles to peace in the region today.

This unprecedented study of the Zapatista rebellion will provoke discussion among students and scholars of contemporary Mexico, political science, Latin American studies, history, sociology, and anthropology.