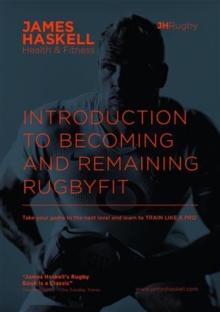 Introduction to becoming and remaining rugbyfit

By: Haskell, James Andrew,  Robinson, Louise(Designed by),  Meziane, Omar(Contributions by)

As a professional rugby player and renowned athlete, James is widely known for his elite athleticism and commanding physique.

As such, it would be fair to say James Haskell knows a thing or two about getting and keeping fit, as well as preparing to play rugby.Since the beginning and the publication of his very first blog, James's mission has been to provide clear, concise information to help both aspiring male and female rugby players, as well as general fitness enthusiasts, to achieve their health and fitness goals.There is an awful lot of information in this book, which equally applies to a number of other sports, aside from rugby, as well as general training advice.At the very heart of James Haskell Health & Fitness exists a burning passion for rugby.

Like no other sport, rugby tests all elements of true fitness: speed, strength, power, agility, balance, endurance and co-ordination.

These sit alongside all of rugby's other core ethics and values; such as teamwork, unity, working for each other, respecting the referee, the opposition and leaving everything on the field of play.James has been inundated with requests from people all over the rugby world to provide specific rugby focused training, fitness and nutritional advice well, now he has answered the clarion call.