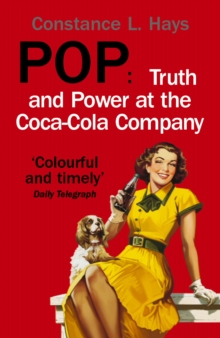 Pop : truth and power at the Coca-Cola company

Coca-Cola is the world's best-known brand, and perhaps the most quintessentially American one: a beverage with no nutritional value, sold variously as a remedy, a tonic and a refreshment.

The story of Coca-Cola is also a tale of carbonisation, soda fountain shops, dynastic bottling businesses, and ultimately, globalisation and billion-dollar promotional campaigns. "New York Times" reporter, Constance L. Hays examines the 116-year history of Coke by describing the charismatic, driven men who, generation after generation, made Coke the world's best-known brand: the Cuban exile who worked his way up the company to become chief executive is just one of the senior managers whose grip on the company led it down extraordinary paths.

Starting with its creation after the Civil War and continuing with its dominion of the domestic and world-wide soft drink business, the story of Coke is one of opportunity, hope, teamwork and love as well as salesmanship, hubris, ambition and greed.

Coke facts include: Richard Nixon lobbied for a seat on the board of Coca-Cola.

Snubbed by Coke, he helped Pepsi make valuable inroads in the Soviet Union. Coke created the biggest marketing flop of all time in 1985 with its introduction of New Coke.

One persistent rumour is that Coke combined with monosodium glutamate is a powerful aphrodisiac.