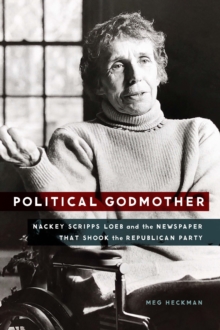 Political Godmother : Nackey Scripps Loeb and the Newspaper That Shook the Republican Party

Political Godmother is a fascinating look into the life and career of conservative powerhouse Nackey Scripps Loeb.

For eighteen years, she served as president and publisher of the Union Leader Corporation, one of the most unusual - and unusually influential - local newspaper companies in the United States.

She inherited the job in 1981 from her late husband, William Loeb, who had spent three decades using the Manchester Union Leader and New Hampshire Sunday News to shape the national conversation around the Granite State's first-in-the-nation presidential primary.

Nackey Loeb was her own force in the right-wing social movements of her day.

During a time when a woman owning a newspaper was rare, especially one as conservative as the Union Leader, Loeb used her position to build a national audience.

Like her husband, she wrote regular front-page editorials, trying to push the Republican Party further to the right.

Much of her rhetoric echoed the anti-feminist activists of her day - she opposed the Equal Rights Amendment, equated abortion to murder, and despised what she called "women's libbers" - but she also used her position to influence areas of conservative politics that had been largely the domain of men.

She maintained a regular and often cheeky correspondence with Ronald Reagan, sometimes publishing her letters (and his responses) on the Union Leader's front page.

She labeled George H.W. Bush "the wimp in Washington" and championed Pat Buchanan as he challenged Bush in the 1992 GOP primary.

Loeb's support of Buchanan was so fierce that, when he won New Hampshire four years later in 1996, he used part of his victory speech to declare her his "political godmother." Political Godmother presents an opportunity to examine the right-wing media landscape during the final two decades of the twentieth century and ponder how it helped shape the modern conservative movement.

In Meg Heckman's capable hands, the narrative addresses the geographic reach of Loeb's audience and the implications of their engagement, which eventually paved the way for modern conservative blogs.

Political Godmother illustrates the often-overlooked ways women have shaped the contours of modern conservatism and showcases the tremendous changes in communications technology and politics as the twentieth century drew to a close.