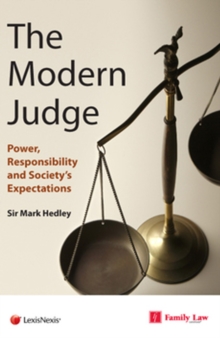 Sir Mark's aim in this book is to be frank rather than scholarly about judging.

The trial judge is in a very different position to the appellate judge.

The trial is where the facts are determined and it is essentially a trail judge who exercises the powers of discretion which modern society increasingly vests in its judiciary.

As society becomes more complex, so does the law. However, law cannot provide for every circumstance and so its application often involves the exercise of discretion.

Criminal sentencing, child welfare, the protection of those who lack mental capacity and disputes about medical treatment are obvious examples.

How do judges go about that? How far are judges influenced or affected by their backgrounds, beliefs and own life experiences? And, if consistency is an aspect of public justice, can that be achieved? And what about the conflict between public justice and personal privacy?

Many see these as pressing questions in a society where judges have perhaps greater effective power than ever before.