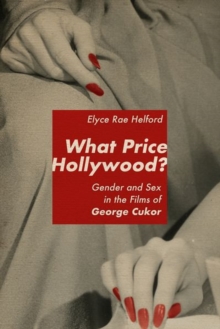 What price Hollywood? : gender and sex in the films of George Cukor

His collaborations with so-called difficult actresses such as Katharine Hepburn, Judy Garland, and Marilyn Monroe unsettled producers even as his ticket sales lined their pockets.

Fired from Gone with the Wind for giving Vivien Leigh more screen time than Clark Gable, Cukor quickly earned a doublesided reputation as a "woman's director." While the label celebrated his ability to help actresses deliver their best performances, the epithet also branded the gay director as suitable only for work on female-centered movies such as melodramas and romantic comedies.

Desperate for success after a failed drag film nearly ended his career, Cukor swore to work within Hollywood's constraints. Nevertheless, What Price Hollywood? Gender and Sex in the Films of George Cukor finds that Cukor continued to explore gender and sexuality on-screen.

Blending biography with critical analysis of more than twenty-five films, What Price Hollywood? tells the story of a once-ina- generation director who produced some of the best films in history.