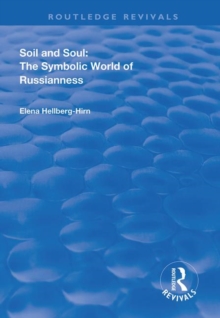 Soil and soul : the symbolic world of Russianness

Part of the Routledge Revivals series

Originally published in 1998, in this book, a number of stereotypes, symbols and signs of Russia, such as the double-headed eagle, the star, bread-and-salt, troika, the Orthodox cross, etc., are presented as a consistent set of metaphors, revealing a symbolic world made by and for the Russians in order to sustain and reinforce their group identity.

The Russian language, culture and history form the basic core of the symbolic archive, or thesaurus, of Russianness, from which the necessary images, symbols and signs of identification are provided to manifest connection with the sphere of Russian identity.

Such symbolism may directly or obliquely refer either to the territory (soil) of Russia, or to the ethnically specific traits of the Russian people (soul).

Both soil and soul are emphatically personified in the symbolic image of Holy Russia - Mother Russia.