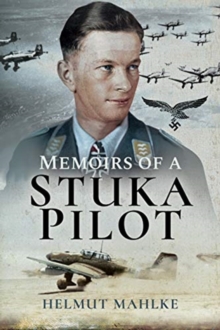 Memoirs of a Stuka pilot

After recounting his early days as a naval cadet, including a voyage to the Far East aboard the cruiser _K ln_, and as the navigator/observer of the floatplane carried by the pocket battleship _Admiral Scheer_ during the Spanish Civil War, the author describes his flying training as a Stuka pilot. The author's naval dive-bomber Gruppe was incorporated into the Luftwaffe upon the outbreak of war.

What follows is a fascinating Stuka pilot's-eye-view of some of the most famous and historic battles and campaigns of the early war years: the Blitzkrieg in France, the Dunkirk Evacuation, the Battle of Britain, the bombing of Malta, North Africa, Tobruk, Crete and, finally, the invasion of the Soviet Union. The author also takes the reader behind the scenes into the day-to-day life of his unit and brings the members of his Gruppe to vivid life; describing their off-duty antics and mourning their loss in action.

The story ends when he himself is shot down in flames by a Soviet fighter and severely burned.

He was to spend the remainder of the war in various staff appointments.