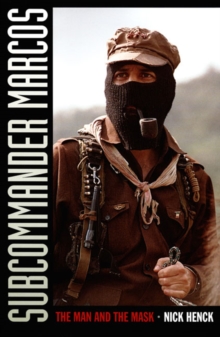 Subcommander Marcos : the man and the mask

Subcommander Marcos made his debut on the world stage on January 1, 1994, the day the North American Free Trade Agreement took effect.

At dawn, from a town-hall balcony he announced that the Zapatista Army of National Liberation had seized several towns in the Mexican state of Chiapas in rebellion against the government; by sunset Marcos was on his way to becoming the most famous guerrilla leader since Che Guevara.

Subsequently, through a succession of interviews, communiques, and public spectacles, the Subcommander emerged as a charismatic spokesperson for the indigenous Zapatista uprising and a rallying figure in the international anti-globalization movement.In this, the first English-language biography of Subcommander Marcos, Nick Henck describes the thought, leadership, and personality of this charismatic rebel spokesperson.

He traces Marcos's development from his provincial middle-class upbringing, through his academic career and immersion in the clandestine world of armed guerrillas, to his emergence as the iconic Subcommander.

Henck reflects on what motivated an urbane university professor to reject a life of comfort in Mexico City in favor of one of hardship as a guerrilla in the mountainous jungles of Chiapas, and he examines how Marcos became a conduit through which impoverished indigenous Mexicans could communicate with the world. Henck fully explores both the rebel leader's renowned media savvy and his equally important flexibility of mind.

He shows how Marcos's speeches and extensive writings demonstrate not only the Subcommander's erudition but also his rejection of Marxist dogmatism.