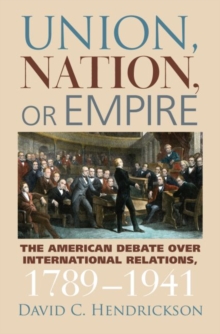 Union, nation, or empire : the American debate over international relations, 1789-1941

Most overviews of American history depict an isolationist country finally dragged kicking and screaming onto the world stage by the attack on Pearl Harbor.

David Hendrickson shows that Americans instead conducted often-raucous debates over international relations in the long epoch customarily seen as isolationist - debates that form the ideological origins of today's foreign policy arguments. ""Union, Nation, or Empire"" is a sequel to Hendrickson's acclaimed ""Peace Pact"", in which he identified a 'unionist paradigm' that defined America's political understanding in 1787.

His new book examines how that paradigm was transformed under the impact of the great wars that followed.

Skillfully drawn portraits of American statesmen, from Hamilton and Jefferson to Wilson and the two Roosevelts, Hendrickson reveals 'union, nation, and empire' as fundamental categories of political discourse that have shaped our engagement with the world since 1776.

Hendrickson argues that the ongoing debate over union, nation, and empire in American history encompasses and illuminates the great questions of international relations - such as whether democracies are as prone to war as monarchies, whether trade promotes peace, or whether empire is compatible with free institutions.

Setting these debates in the context of historical events, from the birth of our federal government to America's entry into World War II, he shows the significance of the federal union in our history and demonstrates that internationalism has deep roots in America's past.

His assessment of the unionist tradition, in counterpoint to rival ideologies of nationalism and imperialism, includes new insights into the causes of the Civil War and shows how after that conflict the building blocks of the original paradigm were reconstructed to shape the internationalist persuasion in the twentieth century.

It challenges accepted interpretations of our role in the world as it restores the federal union to its proper place in the understanding of American statecraft.