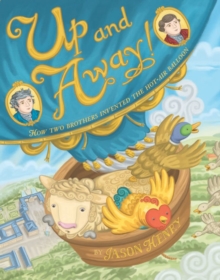 Up and away! : how two brothers invented the hot air balloon

"It will . . . sweep readers away." --Kirkus Reviews "Henry's lush, digital artwork depicts the splendors of eighteenth-century France . . . a good addition to units on aviation and inventors." --BooklistMore than a century before the Wright Brothers invented their plane, Josephand Etienne Montgolfier sent a flying machine into the skies--a hot-air balloon with three animals in the basket.

Go up, up, and away with them on their first, magical journey! Back in 1782, in Ardeche, France, lived Joseph Montgolfier, a dreamer and an inventor who liked to learn about how everything worked.

When one day a gust of wind blew his papers into the fireplace, he noticed that something lifted the pieces into the air--and he realized that heat could make things rise.

With the help of his brother, Etienne, he began to experiment . . . and created a new kind of flying machine: a hot-air balloon!

This beautifully illustrated picture book tells the story of how the balloon came to be, King Louis XVI's visit to see it fly, and the three animals--a rooster, a duck, and a sheep--who became its very first passengers.