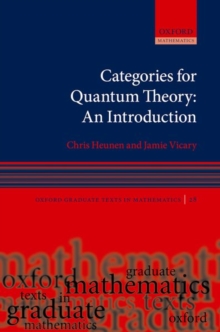 Categories for quantum theory : an introduction

Part of the Oxford Graduate Texts in Mathematics series

Monoidal category theory serves as a powerful framework for describing logical aspects of quantum theory, giving an abstract language for parallel and sequential composition, and a conceptual way to understand many high-level quantum phenomena.

This text lays the foundation for this categorical quantum mechanics, with an emphasis on the graphical calculus which makes computation intuitive.

Biproducts and dual objects are introduced and used to model superposition andentanglement, with quantum teleportation studied abstractly using these structures.

Monoids, Frobenius structures and Hopf algebras are described, and it is shown how they can be used to model classical information and complementary observables.

The CP construction, a categorical tool to describeprobabilistic quantum systems, is also investigated.

The last chapter introduces higher categories, surface diagrams and 2-Hilbert spaces, and shows how the language of duality in monoidal 2-categories can be used to reason about quantum protocols, including quantum teleportation and dense coding. Prior knowledge of linear algebra, quantum information or category theory would give an ideal background for studying this text, but it is not assumed, with essential background material given in a self-contained introductory chapter.

Throughout the text links with many other areas are highlighted, such as representation theory, topology, quantum algebra, knot theory, and probability theory, and nonstandard models are presented, such as sets and relations.

All results are stated rigorously, andfull proofs are given as far as possible, making this book an invaluable reference for modern techniques in quantum logic, with much of the material not available in any other textbook.