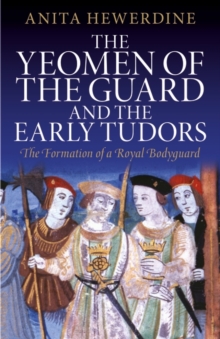 The Yeomen of the Guard and the Early Tudors : The Formation of a Royal Bodyguard

The Queen's Body Guard of the Yeomen of the Guard is the world's oldest surviving royal bodyguard, having been founded by Henry VII in 1485.

Today it is purely a ceremonial body, but in the past it was a true bodyguard and the nucleus of a fighting force at a time when England had no standing army.

Even in its early years its ceremonial role was of great importance, supplying a richly arrayed retinue to enhance the King's status.

In this first comprehensive study of the early years of the Yeomen of the Guard during the reigns of Henry VII and Henry VIII, Anita Hewerdine examines the variety of roles performed by the Guard, both within and outside the Court, as well as detailing the apparel worn by the yeomen and the weaponry with which they were equipped.

Hewerdine's book is the result of intensive research, using numerous unpublished documents, as well as a variety of printed sources not readily accessible to the general public.

It will be essential reading for researchers of Early Modern Military History and sheds light on a previously overlooked aspect of the Tudor Court.