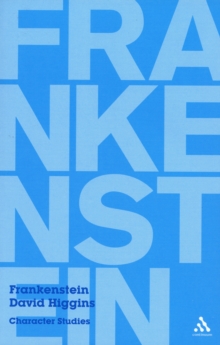 Part of the Character Studies series

Mary Shelley's "Frankenstein" is one of the most widely read novels of all time.

Its two central characters, the scientist Victor Frankenstein and the being he creates, have gained mythic status in their own right.

Engaging with the novel's characterisation is crucial to gaining a real understanding of its themes and contexts, including education, gender difference, imperialism, personal identity, revolutionary politics, and science.This study includes: an introductory overview of the novel, including a brief account of its historical and literary contexts, and reception history; discussion of the major themes and narrative structure; chapters analysing in detail the representation of key characters, such as Walton, Frankenstein, and the Creature; a conclusion reminding students of the links between the characters and the key themes and issues; and a guide to further reading.Written in an accessible style, and informed by recent criticism and scholarship, it is an ideal introduction for students looking to develop an advanced understanding of Mary Shelley's fascinating novel."Character Studies" aims to promote sophisticated literary analysis through the concept of character. It demonstrates the necessity of linking character analysis to texts' themes, issues and ideas, and encourages students to embrace the complexity of literary characters and the texts in which they appear.

The series thus fosters close critical reading and evidence-based discussion, as well as an engagement with historical context, and with literary criticism and theory.