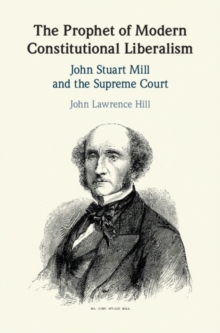 The Prophet of Modern Constitutional Liberalism : John Stuart Mill and the Supreme Court

John Stuart Mill is the father of modern liberalism.

His most remembered work, On Liberty, which was published in 1859, changed the course of the liberal tradition.

What is less well-known is that his ideas have profoundly influenced the American constitutional rights tradition of the latter half of the twentieth century.

Mill's 'harm principle' inspired the constitutional right to privacy recognized in Griswold v Connecticut, Roe vs Wade and other cases.

His defense of freedom of expression influenced Justices Holmes, Brandeis, Douglas, Brennan and others and led to greatly expanded freedom of speech in the twentieth century.

Finally, Mill was an ardent feminist whose last important work, The Subjection of Women, was a full-scale and, for its time, radical defense of complete gender equality.

This is a book for lawyers who want to understand the intellectual origins of modern constitutional rights, and for political philosophers interested in the constitutional implications of Mill's conception of freedom.