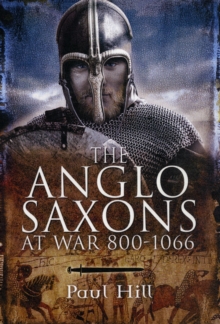 In the time of the great Anglo-Saxon kings like Alfred and Athelstan, AEthelred and Edmund Ironside, what was warfare really like - how were the armies organized, how and why did they fight, how were the warriors armed and trained, and what was the Anglo-Saxon experience of war?

As Paul Hill demonstrates in this compelling new study, documentary records and the growing body of archaeological evidence allows these questions to be answered with more authority than ever before.

His broad, detailed and graphic account of the conduct of war in the Anglo-Saxon world in the unstable, violent centuries before the Norman Conquest will be illuminating reading for anyone who wants to learn about this key stage of medieval history.The role of violence and war in Anglo-Saxon society is explored, in particular the parts played by the king and the noblemen, and the means by which, in times of danger, the men of the fyrd were summoned to fight.

The controversial subject of the Anglo-Saxon use of cavalry is also explored. Land and naval warfare are central sections of Paul Hill's book, but he also covers the politics and diplomacy of warfare - the conduct of negotiations, the taking of hostages and the use of treachery.The weapons and armour of the Anglo-Saxons are described - the spears, the scramsaxes, axes, bows, swords, helmets, shields and mail that were employed in the close-quarter fighting of the day.

Among the most valuable sections of the study are those dealing, in vivid detail, with actual experience of battle and siege - with the brutal reality of combat as it is revealed by campaigns against the Danes, in the battles of Ashdown, Maldon and Stamford Bridge, and sieges at Reading and Rochester.