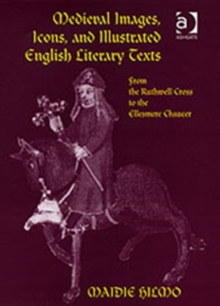 Medieval images, icons, and illustrated English literary texts : from the Ruthwell cross to the Ellesmere Chaucer

The function of images in the major illustrated English poetic works from the Anglo-Saxon period to the early 15th century is the primary concern of this book.

Maidie Hilmo argues that the illustrations have not been sufficiently understood because modern judgements about their artistic merit and fidelity to the literary texts have got in the way of a historical understanding of their function.

She here proves that artists took their work seriously because images represented an invisible order of reality, that they were familiar with the vernacular poems and that they were innovative in adapting existing iconographies to guide the ethical reading process of their audience.

To provide a theoretical basis for the understanding of early monuments, artefacts and texts, she examines patristic opinions on image-making, supported by the most authoritative modern sources.

Fresh emphasis is given to the iconic nature of medieval images from the time of the iconoclastic debates of the 8th and 9th centuries to the renewed anxiety of image-making at the time of the Lollard attacks on images. She offers an important revision of the reading of the Ruthwell Cross, which changes radically the interpretation of the Cross as a whole.

Among the manuscripts examined here are the Caedmon, Auchinleck, Vernon and Pearl manuscripts.

Hilmo's thesis is not confined to overtly religious texts and images, but deals also with historical writing, such as Layamon's Brut, and with poetry designed ostensibly for entertainment, such as the Canterbury Tales.

This study demonstrates how the visual and the verbal interactively manifest the real "text" of each illustrated literary work.

The artistic elements place vernacular works within a larger iconographic framework in which human composition is seen to relate to the activities of the divine Author and Artificer.

Whether iconic or anti-iconic in stance, images, by their nature, were a potent means of influencing the way an English author's words, accessible in the vernacular, were thought about and understood within the context of the theology of the Incarnation that informed them and governed their aesthetic of spiritual function. This is the first study to cover the range of illustrated English poems from the Anglo-Saxon period to the early 15th century.