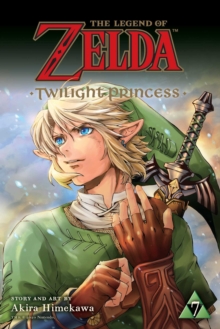 Part of the The Legend of Zelda: Twilight Princess series

Link must defeat evil at every turn in his perilous quest to help Princess Zelda!Once upon a time, wizards tried to conquer the Sacred Realm of Hyrule.

The Spirits of Light sealed the wizards' power within the Shadow Crystal and banished them to the Twilight Realm beyond the Mirror of Twilight.

Now, an evil menace is trying to find Midna, Princess of the Twilight Realm, and the fragments of the Shadow Crystal to gain the power to rule over both the Twilight Realm and the World of Light. Link's battle with his dark alter ego leaves him wounded and exhausted.

With Midna gone and Link unable to harness the power of the Master Sword, his quest seems doomed.

Visions of a grizzled warrior also haunt his dreams, but who is it? And what can this warrior teach Link that he will need to defeat Ganondorf?

Certainly Link will need the Master Sword again, but only a true hero can wield the power of that legendary weapon...