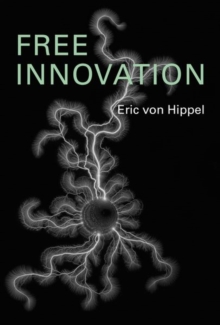 A leading innovation scholar explains the growing phenomenon and impact of free innovation, in which innovations developed by consumers and given away "for free."In this book, Eric von Hippel, author of the influential Democratizing Innovation, integrates new theory and research findings into the framework of a "free innovation paradigm." Free innovation, as he defines it, involves innovations developed by consumers who are self-rewarded for their efforts, and who give their designs away "for free." It is an inherently simple grassroots innovation process, unencumbered by compensated transactions and intellectual property rights. Free innovation is already widespread in national economies and is steadily increasing in both scale and scope.

Today, tens of millions of consumers are collectively spending tens of billions of dollars annually on innovation development.

However, because free innovations are developed during consumers' unpaid, discretionary time and are given away rather than sold, their collective impact and value have until very recently been hidden from view.

This has caused researchers, governments, and firms to focus too much on the Schumpeterian idea of innovation as a producer-dominated activity.

Free innovation has both advantages and drawbacks. Because free innovators are self-rewarded by such factors as personal utility, learning, and fun, they often pioneer new areas before producers see commercial potential.

At the same time, because they give away their innovations, free innovators generally have very little incentive to invest in diffusing what they create, which reduces the social value of their efforts.

The best solution, von Hippel and his colleagues argue, is a division of labor between free innovators and producers, enabling each to do what they do best.

The result will be both increased producer profits and increased social welfare-a gain for all.