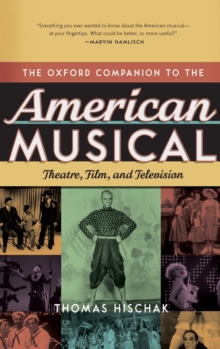 The Oxford companion to the American musical : theatre, film, and television

From films ranging from An American in Paris and Flying Down to Rio to such Broadway landmarks as Oklahoma and West Side Story and television hits such as Cinderella and High School Musical, the American musical has thrilled audiences around the world.

Now, in The Oxford Companion to the American Musical, readers have at last an engaging and authoritative reference to this highly popular genre-the onlysuch book to cover stage, film, and television musicals in one volume. With more than two thousand entries, this book offers a wealth of information on musicals, performers, composers, lyricists, producers, choreographers, and much more.

There are biographical entries on stars ranging from Fred Astaire and Bing Crosby to Mary Martin and Mae West as well as such contemporary show-stoppers as Nathan Lane, Savion Glover, and Kristin Chenowith; on composers ranging from Irving Berlin and George Gershwin to Richard Rodgers and Andrew Lloyd Webber; and onchoreographers such as Bob Fosse, Tommy Tune, and Debbie Allen.

The plays and films covered range from modern hits such as Mamma Mia! and Moulin Rouge to timeless classics such as Yankee Doodle Dandy and Show Boat.

Also, many musicals written specifically for television are included, and many entries follow awork (such as Babes in Toyland) as it moves across genres, from stage, to film, to television.

The Companion also includes cross references, a comprehensive listing of recommended recordings, and a useful chronological listing of all the musicals described in the book. Whether you are curious about Singin in the Rain or Spamalot, The Wizard of Oz or Grease, this well-researched and entertaining resource is the first place to turn for reliable information on virtually every aspect of the American musical. "Everything you ever wanted to know about the American musical-at your fingertips.

What could be better, or more useful?" -Marvin Hamlisch "Kudos to Thomas Hischak for The Oxford Companion to the American Musical.

Resources such as these are extremely important, not only as historic and academic records, but for future generations of artists who need to understand the legacy they have inherited." -Carol Channing