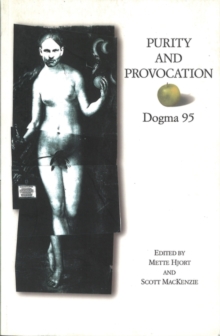 The audacious, attention-grabbing, tongue-in-cheek filmmaker's manifesto that was Dogme 95 has had a massive international impact.

Coinciding with the arrival of cut-price digital technology the aesthetic creed proposed by Thomas Vinterberg ("Festen") and Lars von Trier ("The Idiots") has resonated with young and indie filmmakers in all continents and been credited with a revival of radical back-to-basics guerrilla-style filmmaking.

Many argue it has changed the critical terms in which art and popular cinema are discussed and that it has had an impact on a much wider range of contemporary arts from dance to computer games.This volume brings together leading scholars from a number of disciplines - film studies, literature, philosophy - in order to focus on some of the key historical and conceptual issues associated with the manifesto's original formulation.

In addition to identifying many of the epistemological and aesthetic puzzles to which Dogme 95 gives rise, the book looks at the relationships posited between the avant-garde and popular cinema, the role of "minor cinemas" in a world dominated by Hollywood, and the history and future of art-cinema as a means of cultural exchange beteween national cinemas.

Contributions focus on the Danish Dogme films from "Festen" to "The King is Alive" to the most significant foreign works ("The Lovers", "Fuckland", "Julian Donkey-Boy"), while reference is made to a number of the less successful films.

The aim throughout is to contribute to an in-depth and properly international discussion of the implications of von Trier's and Vinterberg's initiative for contemporary cinema and arts.