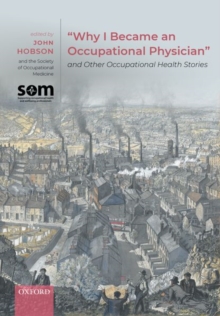 "Why I Became an Occupational Physician" and Other Occupational Health Stories brings together an edited collection of the short articles published in the journal Occupational Medicine between 2002 and 2018.

The articles originally appeared as 'fillers', commissioned to literally 'fill' the blank spaces at the end of the main scientific papers, but they soon became a feature in their own right. Written by doctors working in occupational medicine and health, the fillers began as a series of pieces exploring the varied and often surprising reasons why the individuals chose to pursue this unique speciality, whether it was a natural career move, triggered by a specific event, or stumbled upon by chance.

Over time the articles became much broader in their scope and the journal began to attract pieces from some brilliant writers: Mike Gibson, John Challenor, Nerys Williams, and of coursethe superlative Anthony Seaton, amongst many others. Each article offers something different: a peek into history, a humorous adventure, a quiet musing, or a thought-provoking observation, but all are tied together under the umbrella of occupational medicine, a speciality that is often little known or understood in the wider world of medicine.

This book brings together over 15 years' worth of fascinating and diverse articles into one volume for the first time, giving a rare insight into the world of the occupational physician.