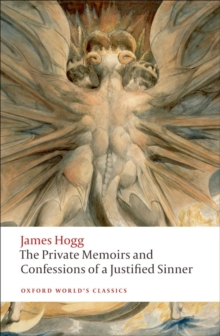 The private memoirs and confessions of a justified sinner

By: Hogg, James,  Duncan, Ian (Professor of English, University of California, Berkeley)(Edited by)

'We have heard much of the rage of fanaticism in former days, but nothing to this'A wretched young man, 'an outcast in the world', tells the story of his upbringing by a heretical Calvinist minister who leads him to believe that he is one of the elect, predestined for salvation and thus above the moral law. Falling under the spell of a mysterious stranger who bears an uncanny likeness to himself, he embarks on a career as a serial murderer.

Robert Wringhim's Memoirs are presented by an editor whose attempts to explain the story only succeed in intensifying its more baffling and bizarre aspects. Is Wringhim the victim of a psychotic delusion, or has he been tempted by the devil to wage war against God's enemies? Hogg's sardonic and terrifying novel, too perverse for nineteenth-century taste, is now recognized as one of the masterpieces of Romantic fiction. The first edition text of 1824 has been freshly considered for this new edition.

A critical introduction explores the remarkable career of the novel's author and its historical, theological, and cultural contexts.