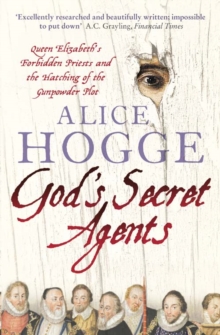 HarperPerennial
0007156383 / 9780007156382
Paperback
942'.055'088282
05/06/2006
Usually dispatched within 4 weeks
England
20 cm vii, 445 p., [24] p. of plates : ill. (some col.)
general  Learn More
Reprint. Originally published: London: HarperCollins, 2005.
/ Lead title / Includes PS Section A thrilling account of treachery, loyalty and martyrdom in Elizabethan England from an exceptional new writer. / Brilliant debut from a brilliant new writer of history -- Alice Hogge's book uncovers a forgotten strand of our history and is accessible, character-driven and gripping. / Tells the story of Britain caught in religious extremism, of torture and betrayal. It tells the story of men with great courage and faith, facing grisly martyrdom every day. / Based on original research, this is the first time the story of the Jesuit mission in Britain has been t

This book offers a thrilling account of treachery, loyalty and martyrdom, in Elizabethan England from an exceptional new writer.

As darkness fell on the evening of Friday, 28 October 1588, just weeks after the defeat of the Spanish Armada, two young Englishmen landed in secret on a Norfolk beach.

They were Jesuit priests. Their aim was to achieve by force of argument what the Armada had failed to do by force of arms: return England to the Catholic Church.

Eighteen years later their mission had been shattered by the actions of a small group of terrorists, the Gunpowder Plotters; they themselves had been accused of designing 'that most horrid and hellish conspiracy'; and the future of every Catholic they had come to save depended on the silence of an Oxford joiner, builder of priest-holes, being tortured in the Tower of London. 'God's Secret Agents' tells the story of Elizabeth's 'other' England, a country at war with an unseen enemy, a country peopled - according to popular pamphlets and Government proclamations - with potential traitors, fifth-columnists, and assassins.And, it tells this story from the perspective of that unseen 'enemy', England's Catholics, a beleaguered, alienated minority, struggling to uphold its faith.