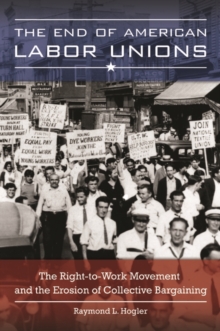 The end of American labor unions : the right-to-work movement and the erosion of collective bargaining

By examining the history of the legal regulation of union actions, this fascinating book offers a new interpretation of American labor-law policy-and its harmful impact on workers today. Arguing that the decline in union membership and bargaining power is linked to rising income inequality, this important book traces the evolution of labor law in America from the first labor-law case in 1806 through the passage of right-to-work legislation in Michigan and Indiana in 2012.

In doing so, it shares important insights into economic development, exploring both the nature of work in America and the part the legal system played-and continues to play-in shaping the lives of American workers. The book illustrates the intertwined history of labor law and politics, showing how these forces quashed unions in the 19th century, allowed them to flourish in the mid-20th century, and squelched them again in recent years.

Readers will learn about the negative impact of union decline on American workers and how that decline has been influenced by political forces.

They will see how the right-to-work and Tea Party movements have combined to prevent union organizing, to the detriment of the middle class. And they will better understand the current failure to reform labor law, despite a consensus that unions can protect workers without damaging market efficiencies. Provides a unique interpretation of labor law from a multidisciplinary perspective that encompasses history, politics, economics, culture, and psychologyConsiders the role organized labor played in creating the American middle class and what role it might play in the futureShows the adverse consequences of the contemporary right-to-work movementExamines the politicized nature of law in America Offers recommendations for political action to restore union vitality