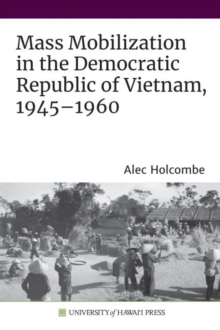 Mass Mobilization in the Democratic Republic of Vietnam, 1945-1960

Immediately after its founding by Ho Chi Minh in September 1945, the Democratic Republic of Vietnam (DRV) faced challenges from rival Vietnamese political organizations and from a France determined to rebuild her empire after the humiliations of WWII.

Ho, with strategic genius, courageous maneuver, and good fortune, was able to delay full-scale war with France for sixteen months in the northern half of the country.

This was enough time for his Communist Party, under the cover of its Vietminh front organization, to neutralize domestic rivals and install the rough framework of an independent state.

That fledgling state became a weapon of war when the DRV and France finally came to blows in Hanoi during December of 1946, marking the official beginning of the First Indochina War.

With few economic resources at their disposal, Ho and his comrades needed to mobilize an enormous and free contribution in manpower and rice from DRV-controlled regions.

Extracting that contribution during the war's early days was primarily a matter of patriotic exhortation.

By the early 1950s, however, the infusion of weapons from the United States, the Soviet Union, and China had turned the Indochina conflict into a "total war." Hunger, exhaustion, and violence, along with the conflict's growing political complexity, challenged the DRV leaders' mobilization efforts, forcing patriotic appeals to be supplemented with coercion and terror.

This trend reached its revolutionary climax in late 1952 when Ho, under strong pressure from Stalin and Mao, agreed to carry out radical land reform in DRV-controlled areas of northern Vietnam.

The regime's 1954 victory over the French at Dien Bien Phu, the return of peace, and the division of the country into North and South did not slow this process of socialist transformation.

Over the next six years (1954-1960), the DRV's Communist leaders raced through land reform and agricultural collectivization with a relentless sense of urgency.

Mass Mobilization in the Democratic Republic of Vietnam, 1945-1960 explores the way the exigencies of war, the dreams of Marxist-Leninist ideology, and the pressures of the Cold War environment combined with pride and patriotism to drive totalitarian state formation in northern Vietnam.