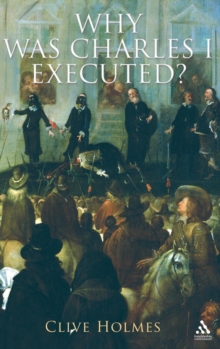 Why was Charles I executed?

The execution of Charles I in 1649, followed by the proclamation of a Commonwealth, was an extraordinary political event.

It followed a bitter Civil War between parliament and the king, and their total failure to negotiate a subsequent peace settlement.

Why the king was defeated and executed has been a central question in English history, being traced back to the Reformation and forward to the triumph of parliament in the eighteenth century.

The old answers, whether those of the Victorian narrative historian S.R.

Gardiner or of Lawrence Stone's diagnosis of a fatal long-term rift in English society, however, no longer satisfy, while the newer ones of local historians and 'revisionists' often leave readers unclear as to why the Civil War happened at all.

In "Why Was Charles I Executed?", Clive Holmes supplies clear answers to eight key questions about the period, ranging from why the king had to summon the Long Parliament to whether there was, in fact, an English Revolution.