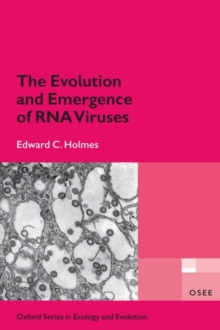 The evolution and emergence of RNA viruses

Part of the Oxford series in ecology and evolution series

RNA viruses provide unique insights into the patterns and processes of evolutionary change in real time.

The study of viral evolution is especially topical given the growing awareness that emerging and re-emerging diseases (most of which are caused by RNA viruses) represent a major threat to public health.

However, while the study of viral evolution has developed rapidly in the last 30 years, relatively little attention has been directed toward linking work on themechanisms of viral evolution within cells or individual hosts, to the epidemiological outcomes of these processes.

This novel book fills this gap by considering the patterns and processes of viral evolution across their entire range of spatial and temporal scales.

The Evolution and Emergence of RNA Viruses provides a comprehensive overview of RNA virus evolution, with a particular focus on genomic and phylogenetic approaches.

This is the first book to link mechanisms of viral evolution with disease dynamics, using high-profile examples in emergence and evolution such as influenza, HIV, dengue fever, and rabies.

It also reveals the underlying evolutionary processes by which emerging viruses cross species boundaries and spread in newhosts.